I hear periodic bursts of Canadian Geese honking as they begin their travels South. In my van I follow their cue. The mighty Mississippi River moves effortlessly beside the road winding its way southward as well. It stretches its banks grabbing the shores of Minnesota with one hand and Wisconsin with the other. In some places it seems to tug tight enough to flatten the horizon like a sheet laid out on a freshly made bed. In other areas, its grip is relaxed enough to allow some grand wrinkles in the landscape tapestry.

The almost-but-not-quite mountains in the wrinkled tapestry are dressed in an impressive showing of trees. They seem to be listening to a silent autumn countdown that hasn’t yet allowed their colors to change. A few impatient and over zealous leaves are early to arrive, but the grand show is still around the corner.

My eyes are thirsty and coming to the fountain to drink as I drive down the road seeing things I’ve previously only read about in books. A passing lock and dam belong on the pages of Paddle-to-the-Sea and Tom Sawyer and Huckleberry Finn belong on a raft in the river. I feel privileged to step into the pages of time and space and link hands with others who have made their own relationship with these hills, waters and land.

One such place that unlocked time and space this week was Pepin, Wisconsin. It was here that Laura Ingalls Wilder was born and lived her early childhood days in her Little House in the Big Woods. What a treat it was to stop and stand on the same ground and watch my kids romp and play in the same yard that she once played. Isn’t it amazing to think of the layers of lives that intersect over the same land with the passage of time?

After reflecting on the age that Laura was when she began her writing career (sixty-five), I was struck by the impact that might not have been made had she never shared her experiences as a child through story. I learned that Laura was surprised by the success of her first book and told an interviewer, “I thought that would end it. But what do you think? Children who read it wrote to me begging for more. I was amazed because I didn’t know how to write. I went to little red schoolhouses all over the West and I never was graduated from anything.” Did you catch that part where she said she “didn’t know how to write?” Yet she continued to do what she felt she was not particularly gifted to do because children were begging for more. Now we all receive the blessing. 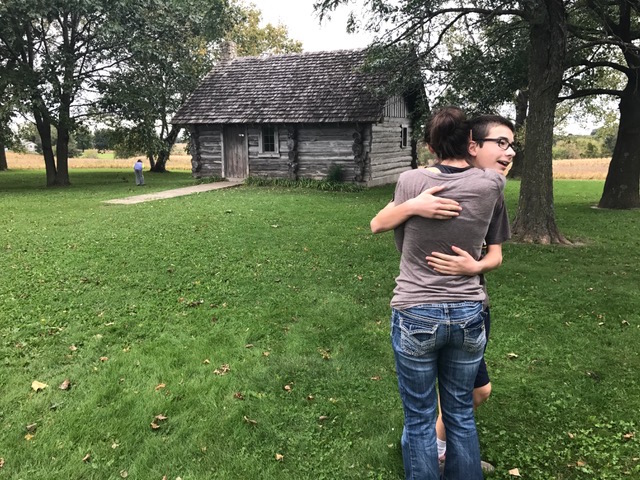 How many of us have been given a gift that we don’t feel equipped to properly use? This week Laura taught me that it is never too late to start something great–the grand show may be just around the corner. The children who wrote her begging for more taught me that even those who have extreme promise often require those around them to reflect encouragement and support to continue down their path. May we never shrink back from doing what God has put inside of us and may we never keep silent when we could instead speak life to those around us.

Starting down this traveling road excites me. There is so much to see and learn. My eyes are open and I’m anxious to write my own story on the landscape.