How did Connecticut end up becoming my least favorite state? It’s complicated.

It started out so sweet and innocent. First, there were the trees and green fields–always a nice start. Next, there were two lovely Harvest Host experiences where we got to boondock in beautiful locations (more on that in a future post). Then, there was the memory of that sweet old holiday movie I’d watched as a kid called Christmas in Connecticut–all good things. 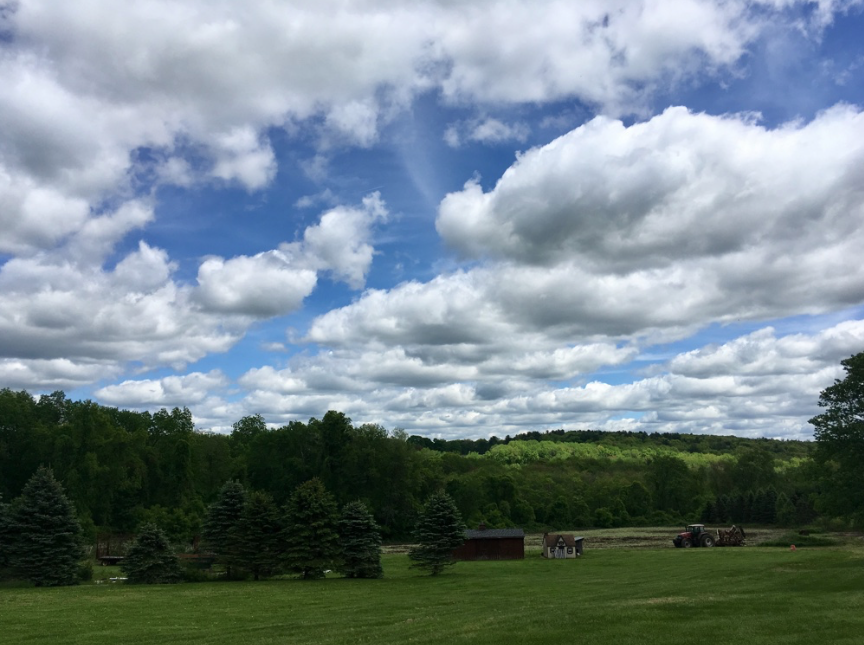 Jump forward to a few days ago when we innocently drove by a town called Lyme, CT followed by Old Lyme and then East Lyme. “Wait, what did those signs say? Lyme…as in Lyme’s disease? That can’t be right.”

Things quickly went downhill from there. 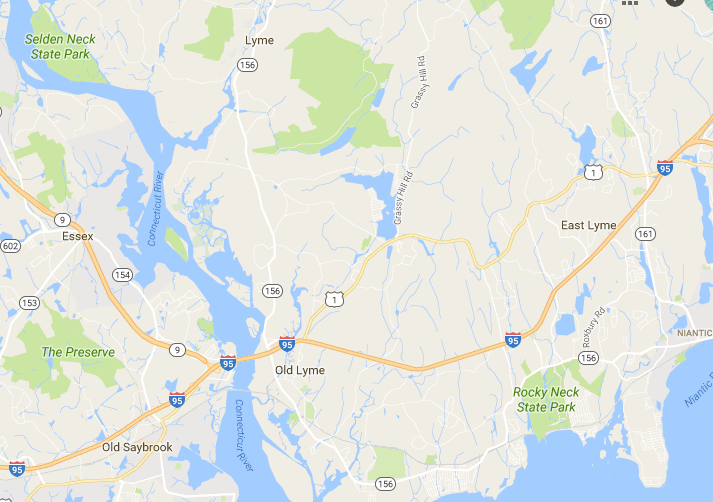 Upon arriving in our first Connecticut campground, I mentally note how fortunate we are to have a nice wooded area behind our RV for the kids to play in. Within minutes they are covering the ground rules for their makeshift game in the forest and I smile thinking about the hours of play that little grove will bring. 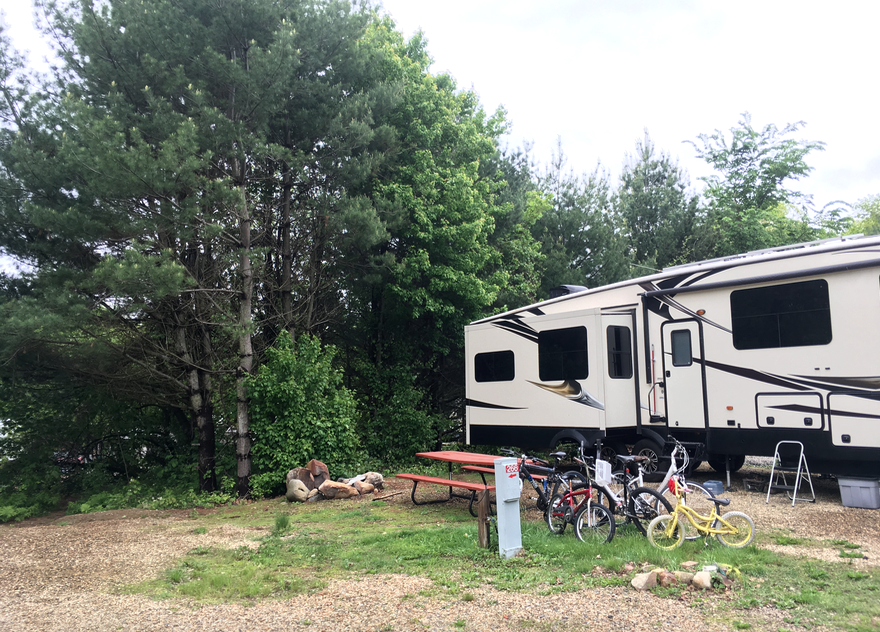 Moments later we are greeted by the friends we’d planned to meet here. This will be the third time our paths have crossed with the Dostie family on the road; the first being in Florida this past winter and the second while in Hershey, PA. Originally from Connecticut, Frank, Shelley and their two daughters are currently work camping at this RV park. 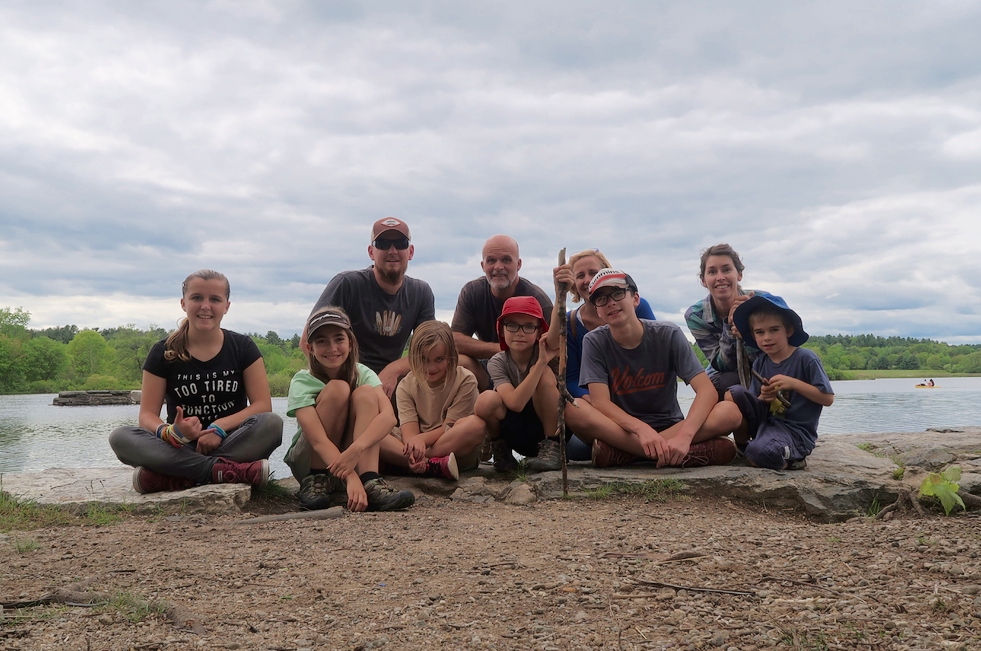 After exchanging hellos, Frank (a former Ranger and Retired Master Sargent in the US Army), promptly brings us up to speed on all the important info we need to know about the area:

My eyes shift sideways just in time to see Ashlyn stealthily ascending a tree trunk in the middle of the woods. I take a moment to process the information that is being spoken to me. It’s coming fast and I don’t really want any of it to apply to us. But he isn’t finished.

I let that last morsel of info slip into my brain while I simultaneously restrain myself from abruptly commanding my children to flee from the woods to safety. But he’s not finished yet.

JUST FOR LOOKING AT

By now my head is starting to hurt and I confess that I don’t know how to identify Poison Ivy. I ask Frank to take us on a tour to learn what it looks like. He heads directly to the little forest grove behind our RV and begins pointing, “It’s here,” he says identifying plants in the area in which I had walked just moments ago. “Also, here and here.” We continue to follow him as he identifies 70% of the low lying vegetation. So basically the forest is just for enjoying at a distance, I conclude internally.

I snap a photo with my phone in the hopes that I won’t forget the characteristics of this three-leaf, wickedly unsuspecting plant. Instantly, I’m homesick for the West where I somehow grew up blissfully unaware of the dangers of ticks and poison plants. 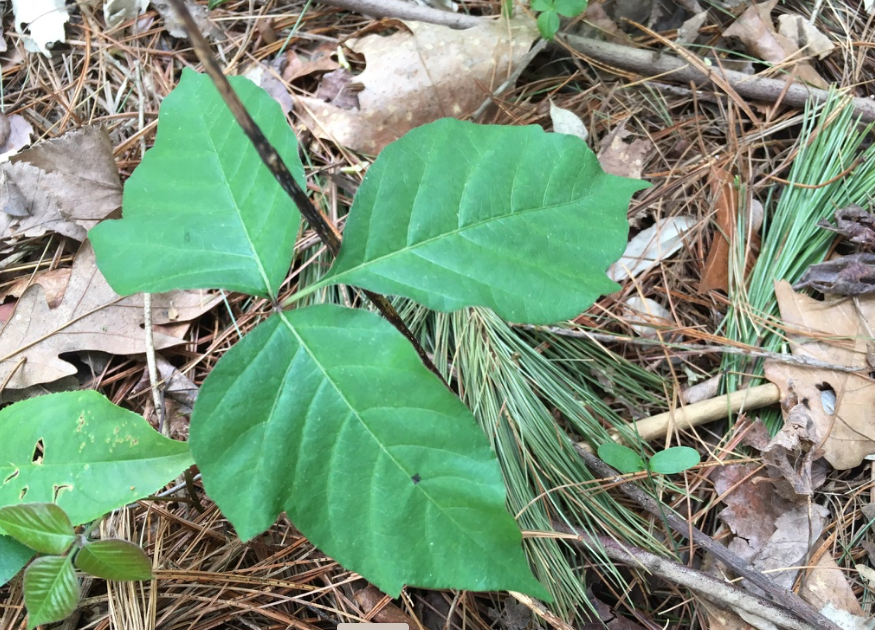 The following day, Shelley and I bring the kids to Bakerwoods farm where Trent and Frank have been helping for the morning. We are given a tour of the animals (which include goats, geese, rabbits, numerous birds as well as a donkey and a peacock). The kids run around in utter glee assigning names to every animal in sight. 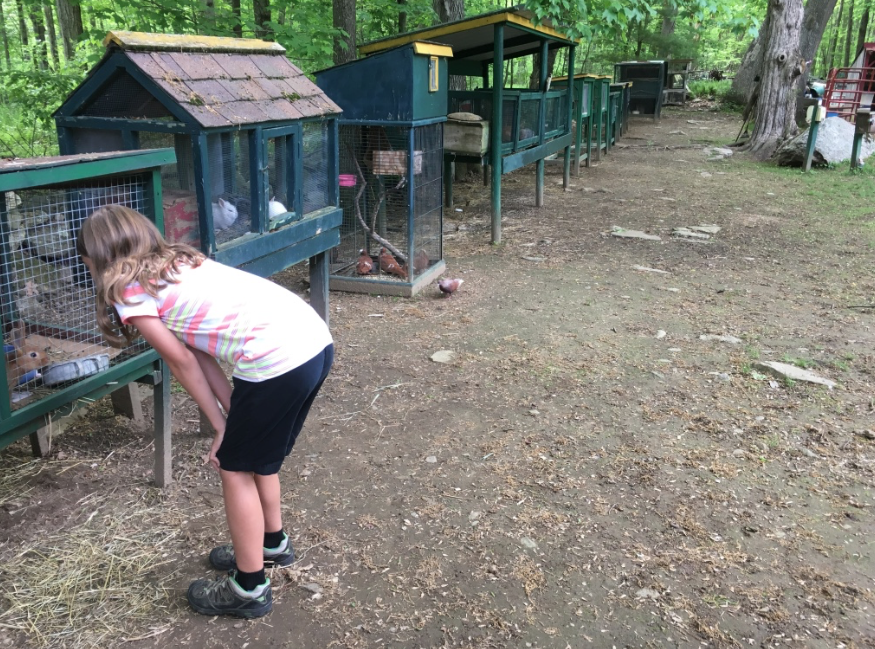 Meanwhile, stories begin to pour forth from Nancy, the owner, about her farm and the many adventures that she has had growing up here. Nancy tells of her mother who was left alone to raise her children without electricity while her husband went off to war. “Before my dad left he built a flag pole so my mom could raise a white flag if she ever needed help. Upon doing so, someone from the community would come to her aid.” She pauses. “The last thing my mom told me before she died was, ‘Never raise the white flag.‘” The weight of what she has just said slowly sinks in and I’m struck by her fierce independence and dogged determination. 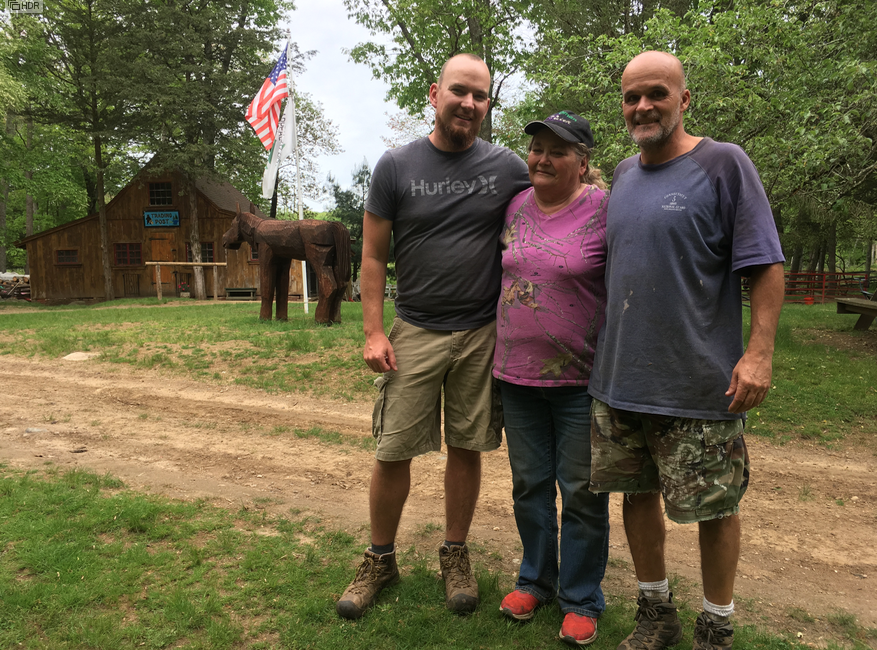 Nancy doesn’t linger however and her next story snaps me back to the present. I’m just in time to hear about the time a water snake followed her back and forth while she swam laps across the nearby pond. This story is delivered in such a nonchalant manner that I’m forced to look to the faces of the others standing around for clues to the story’s authenticity. When they chuckle and shake their head, I conclude that snakes are simply another common occurrence in the state of Connecticut.

While Trent and Frank finish emptying animal stalls of manure, Shelley and I take the kids on a gnome I-spy nature walk. We work our way into the woods and I will myself not to think about the ticks waiting silently in the vegetation or the poison ivy that might be climbing along the trail. The kids busy themselves clearing beaver dams from the streams and my mind relaxes slightly. 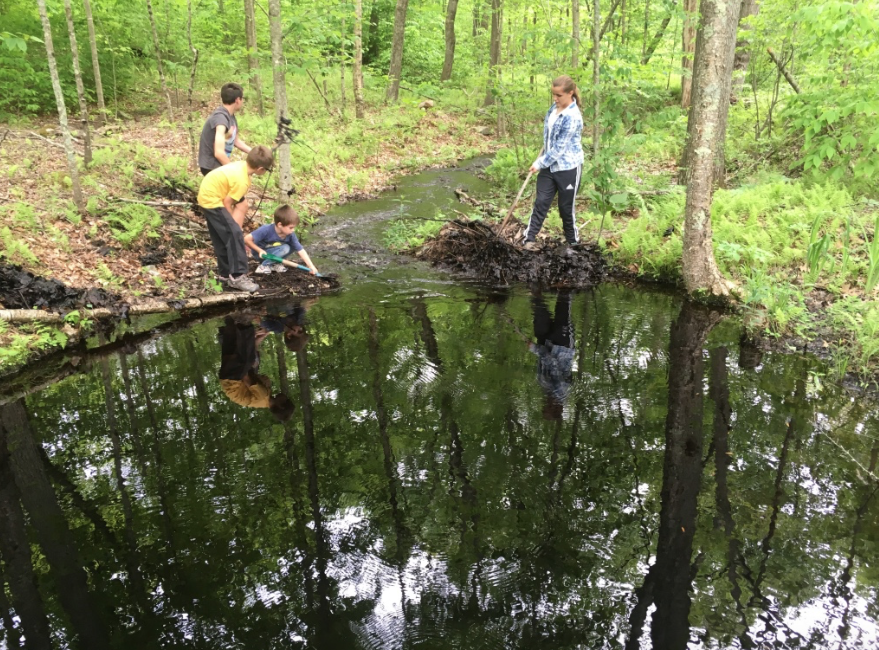 Shelley diverts from the trail to look for a letterbox previously placed a distance away. Moments later she is back wide-eyed and out of breath. “I just saw my first rattlesnake!” We gather the kids, return to the trail and make our way directly back to the farm.

We are greeted by Nancy offering glass bottles of soda to the children. As they sit down to chug their strawberry flavored Hosmer Mountain Soda, Frank takes the opportunity to point out the small, black caterpillars crawling up the side of the picnic table. 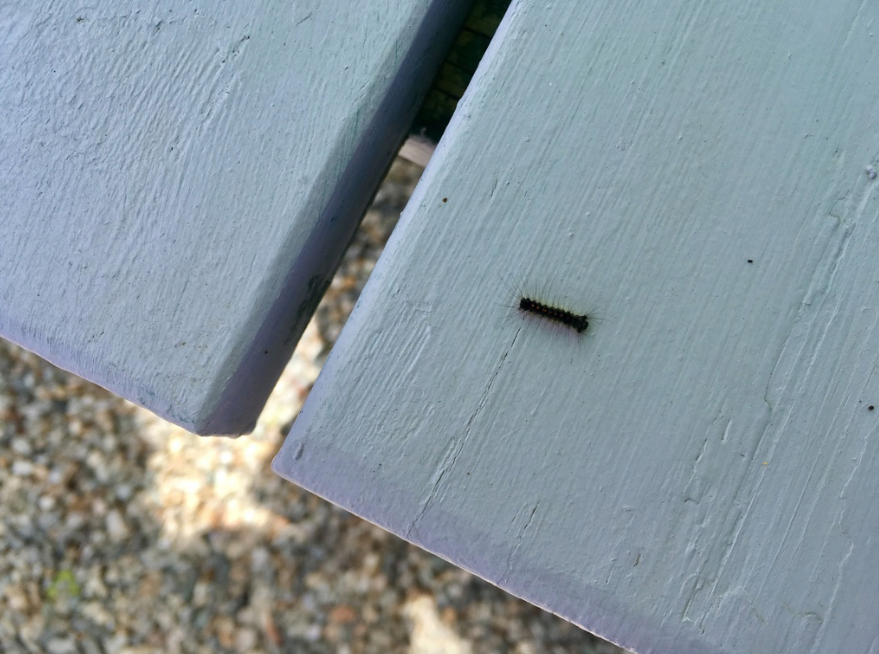 “When I was a kid we used to play with these Gypsy Moth caterpillars by the handful,” he says. “But now when you touch them, they give you a nasty rash. I don’t know what happened, but try not to touch them.” He proceeds to point out the offenders and then then turns to squash the encroaching herd of fuzzy foe. My mind wonders where that white flag is kept, I just might be needing it soon. 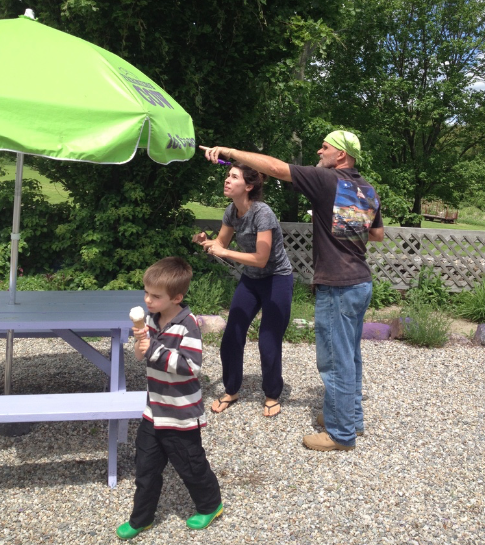 It has now been a week and the good news is that so far we have avoided the poison ivy, poisonous snakes, troublesome caterpillars and we are getting really good at administering tick checks. Trent and I have even discovered that checking each other for ticks can be a great cover for some alone time in the bedroom. The bad news is that I feel disproportionately distracted by Connecticut’s downsides. I see the lush green forests and green rolling fields and I think, “You look so welcoming, but you are a potential pit of problems!” Please give me grace. I am still in the early states of New England grief and I’m currently working through my shock.

I know Connecticut has redeeming qualities. After all, tough Nancy has stuck it out all these years without raising her white flag. I also realize that this state is not alone in her problems (ticks, poison plants and snakes can be found across the country). I need some balance here. Please tell me something YOU like about Connecticut so we can end this visit on a good note.

24 thoughts on “my least favorite state so far | Connecticut”