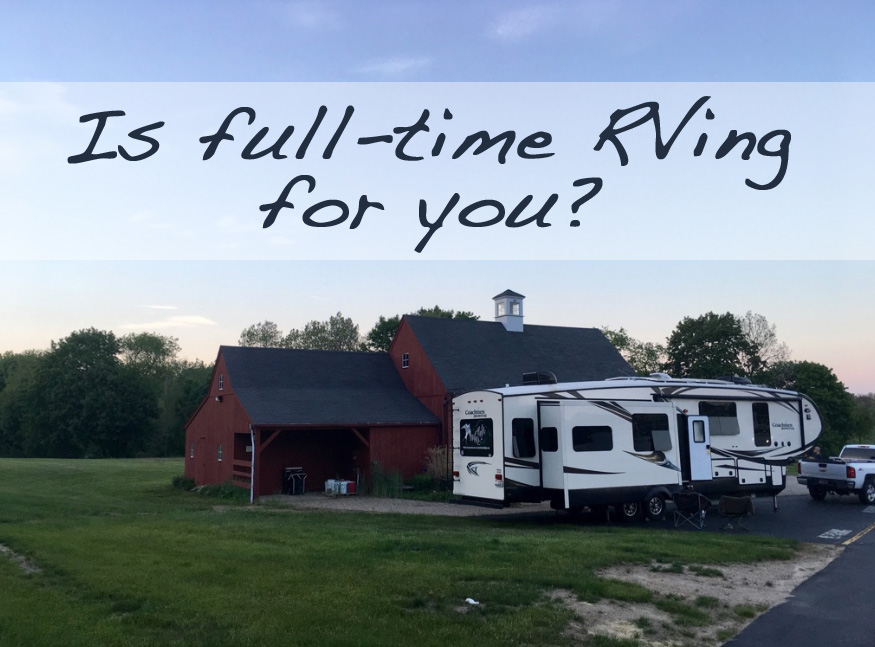 Like dandelion seeds blown in the wind, our first year living full-time in an RV has swept past us with fervor. In some ways it feels as though we have only just begun, while other factors (such as the fact that I can now literally, just barely, look up to my oldest son) confirm the passage of time. 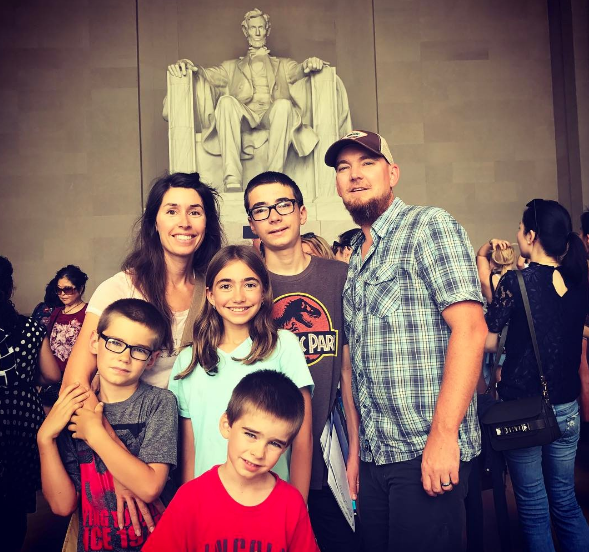 Many of you have said that you would like to come along with us. This got me thinking about what it takes to thrive in our nomadic lifestyle. In that spirit of adventure I’d like to present this list of possible disqualifiers.

Is Full-Time RV living for you? Take this simple 10 question quiz to find out how you fare. Hint: if you have paper handy, note the question # and if you answer “yes” or “no”. It will make your scoring at the end easier. END_OF_DOCUMENT_TOKEN_TO_BE_REPLACED 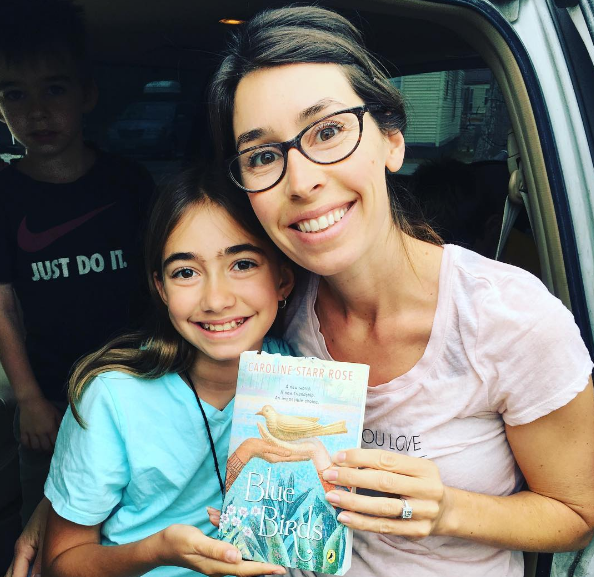 If I could travel the United States reading good books and comparing what I see before me with the pages in my hands, I’d be a lucky lady.

Hi. My name is Heather and I’m a really lucky lady.

Two weeks ago our family ventured to the eastern edge of North Carolina. We explored the Outer Banks with abandon and adoration. Among our adventures, we learned about the Lost Colony of Roanoke. I was intrigued to uncover a piece of our Nation’s past that is often historically hidden. 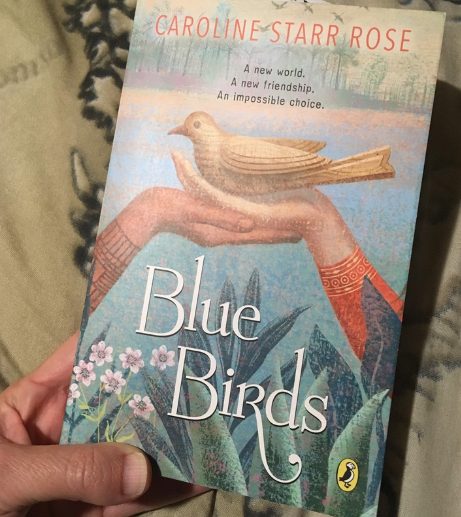 It turns out I am not the only one who has found fascination within this dormant mystery. Author Caroline Starr Rose was so stirred by this same story that she set out to write her own ending. Her book Blue Birds explores what happens when cultures clash with mistrust and fear begins to dominate decisions. Reaching deeper, she develops the idea of what it means to be loyal and how far friendship can go before everything is tested. Both my daughter Ashlyn (11) and I consumed this fast moving historical fiction novel in the span of a week. The ending includes an intriguing twist and became a good conversation starter between the two of us.

I wanted to know more about Caroline’s personal story. Visiting her website, I discovered that she has had some really amazing travel adventures. Curious to know how her travels have influenced her writing, I began asking questions. Caroline graciously agreed to not only answer my burning questions, but to share them with you! I hope you enjoy my candid conversation with this truly gifted author. END_OF_DOCUMENT_TOKEN_TO_BE_REPLACED

What happens when death visits and you have no one to talk to about your loss? How I discovered my tribe and found a voice in the void.

Whether its facing toddler tantrums or travel woes, potty training or panic attacks, it feels good to know we are not alone. Talking with others who are or have walked a similar road of celebration or sorrow is comforting, if not simply confirming, that we are not slipping silently into insanity. However, certain topics are by default easier to talk about than others. Menopause for instance is a conversation I have not dug into with anyone just yet. To be honest, that future period of my life (or lack thereof if you know what I mean wink-wink) is still very hazy. Stillbirth is another not-so-common topic of discussion. The unfortunate consequence is that grieving can be a confusing and lonely place to find yourself.

Eight years ago, when our third child (Sawyer) died three weeks before his due date, I faced a mountain of unknowns. What was it like to deliver a dead baby? Does one have a memorial service in a situation like this? How do we explain his death to our children (who were 5 and 3 at the time)?  After delivery should our kids be allowed to hold their baby brother or be sheltered from seeing him? Should I change plans and deliver him in a hospital or continue with the home birth as planned? Should we induce or wait until my body went naturally into labor? Should we bury or cremate his body? Would my body still produce breast milk? How long would it be until my mind could conceive a single thing that was not somehow tangled in thought to my son? Would the pain ever go away? Was it normal to want to get pregnant again so soon? The questions seemed as endless as the grief. I’d never known anyone to face this kind of loss to whom I could go to and ask questions. Or so I thought. . .

Stillbirth is further classified as either early, late, or term.

Stillbirth effects about 1% of all pregnancies, and each year about 24,000 babies are stillborn in the United States.1 That is about the same number of babies that die during the first year of life and it is more than 10 times as many deaths as the number that occur from Sudden Infant Death Syndrome (SIDS).

As it turns out, that 1% segment of the population was much larger than I realized and as I began to write about my stillbirth story on my blog, I began to connect with women who knew the road I was walking because they had traveled it themselves. I also began meeting others who had bravely walked alongside those women. Together we were stronger, braver and had more purpose than we did alone. Many of these women were willing to share a part of their stillbirth or infant loss story in my recent book, “Finding Joy in the Mourning: A Mother’s Journey through Grief to Hope & Healing“.  They openly answered questions such as:

Isn’t it beautiful to think of the combined consensus of support that can await those who have a tribe of understanding hearts surrounding them? I want that. I want that for myself and I want that for you. Be it parenting, marriage, lifestyle choices (living in an RV anyone?) or grieving, we all need “our people”.

August 7th at 6 PST/9 ET I had the opportunity and privilege to speak to my new tribe of fellow full-time RV traveling families about losing Sawyer and the book that followed on the Roadschool Moms radio show. I chatted live with co-hosts Kimberly and Mary Beth and you can still listen to the recorded podcast here if you prefer iTunes or here if you would rather just listen to it via their website page.

Lastly, if you or someone you know is grief-stricken, I’d consider it an honor if you would share my book with them. I’d love to have the opportunity to keep them company on their own journey of sorrow and, Lord willing, bring them some glimpses of hope and healing.

Today I had the privilege of writing a guest post for Michael Boyink over at his blog Ditching Suburbia.  In it I talk about the process we took in downsizing from our 5 bedroom/5 acre home into our 5th wheel. I also share how we narrowed down our clothing, toys and kitchen gadgets. Can you guess which 5 appliances made the cut? Click over to find out. While you are there, take a look around. He has a lot of great resources for families seeking to live uncommon lives.