Most habits and routines in our home are intentional and planned, but the snack shop was not.  It started out as a fun hands-on one time math lesson for Hunter almost a year ago.  I gave him a dollar and a homemade menu and he purchased his snack(s) for the morning while we discussed coin values and making change. He enjoyed it more than I anticipated and requested that we repeat the routine the next day.  A weekend came and went and both of us forgot about the fun snack shop until a month or two ago when he looked at me with eyes laced with hints of nostalgia and said, “mom, can we do the snack shop again?” 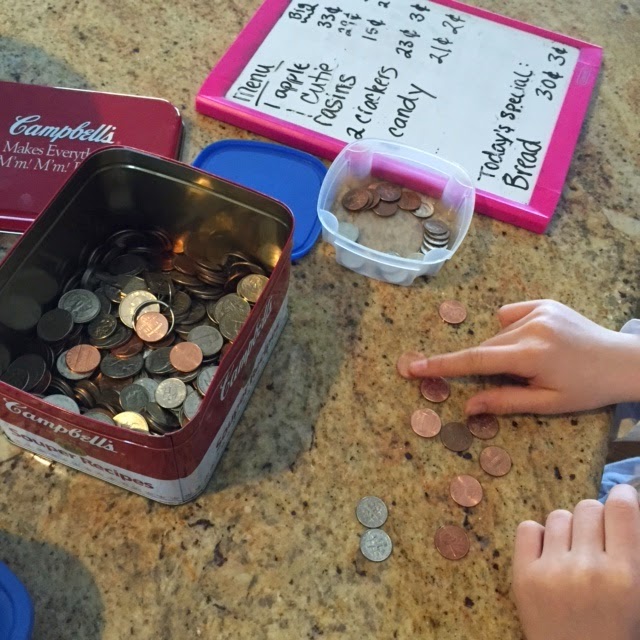 As I thought about it, I realized the snack shop could be a really fun and educational routine in our home.  We began doing it almost every morning between 10:00am and 11:00am. Here is how it works: Using a container of loose change to hold my coins, I “pay” my older two kids (9 and 11) $1.00 and my younger two (3 and 5) 0.10.  The menu is written up on a small white board and changes periodically based on the availability of the items listed.  For my menu items, I stick to basic things that I almost always have on hand and foods that are quick and easy.  I have two columns of prices, one for the older kids and one for the younger kids.  I have a variety of price ranges for the older kids to allow them the opportunity to use different coin values. I often price anything sugary higher than the healthy options and limit the purchases to one. 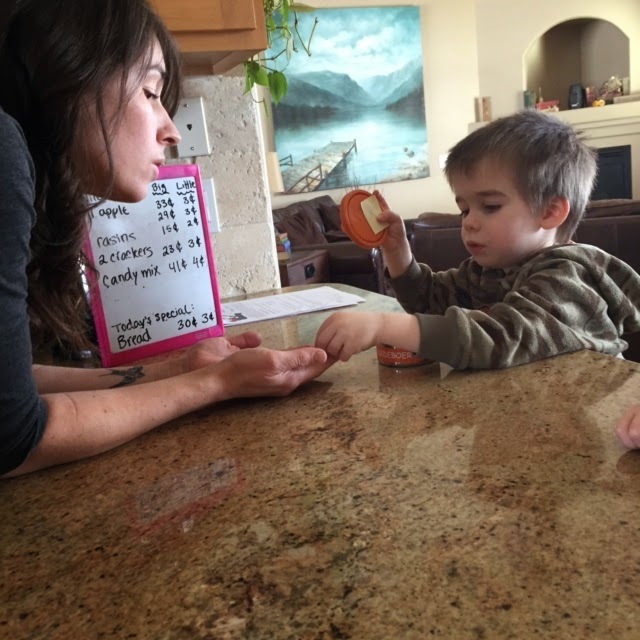 I began by giving my younger boys ten pennies (counting them out loud) and stuck with that until they were very familiar with the routine.  Later I began giving my 5 year old his pennies two at a time so we could practice counting by twos allowing my 3 year old to listen in and learn as well.  Recently I introduced the dime to my younger two.  I give them a dime and then they trade it in for 10 pennies and then begin to make their purchases. I plan to continue with the dime concept for another month or so until I feel they really have the idea solidified in their mind that one dime is equal to ten pennies.  After that, I will give them two nickels and we will trade those in for ten pennies and then later I will give them one dime which we will trade for 2 nickels which will then be traded for 10 pennies. END_OF_DOCUMENT_TOKEN_TO_BE_REPLACED