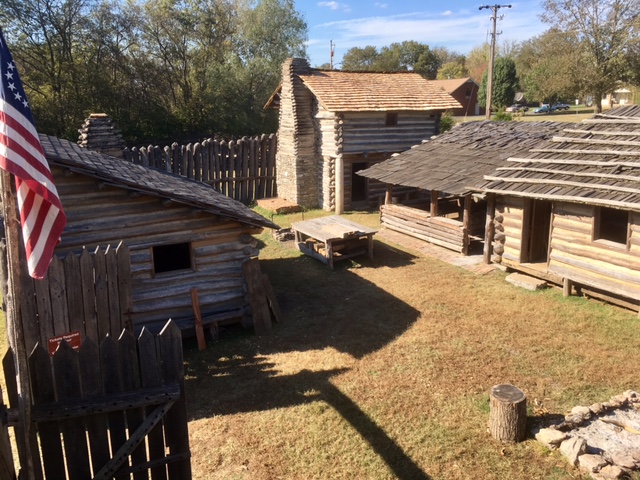 This week we dipped our 21st century fingers into the pot of the late 1700s past to test and try to understand what it was like to live in a fort forged by men who were masters of skills that most of us don’t even have the vocabulary to explain. Stopping at Historic Manskers Station, just 20 minutes north of Nashville in route to Kentucky, was an ideal way to sample this life of the past.

According to some online reviews, we anticipated costumed interpreters and expected to spend about 1-2 hours touring the recreated fort. We arrived just after they reopened from the one hour lunch break at 1:00 and discovered, much to our delight, that we had the place to ourselves. Upon our entrance to the fort, we were met by a burly mountain of a man who was enthusiastic not only about the fact that we were homeschoolers (“they ask the best questions,” he said), but about his historical knowledge. Like a pot of well warmed soup, he bubbled over with bits of information and interesting tidbits while showing us around. Any questions we asked were met with a knowledgeable answer.

About 1/2 way through our tour we met a second guide who continued our deluge of learning. This time we received an education and demonstration of the importance of the local blacksmith. The video below shows our children trying their hand at keeping the blacksmith fire burning.

Switching back to our initial guide, we were invited into the woodworking shop for a demonstration of his lathe (see the video below) and shave horse skills while explaining details of his craft and tools. The kids were invited to partake in some of the activities (sans sharp objects).

Next we were escorted into the nearby 200-year-old Bowen Plantation home (the longest standing brick structure in middle Tennessee) and given a tour and explanations of various antique medical equipment (because the home was at one time owned by a doctor). In addition, we were given a demonstration of various textile machines for the development of fabric from hemp, cotton and wool. It was also here that we saw our first cotton plants in bloom and had the chance to attempt seed removal by hand (think cotton wrapped around velcro). The afternoon was a plethora of one-on-one experiential learning.

Overall our experience was fantastic. I could not have asked for a better value for the time, knowledge and expertise demonstrated through their patient staff. I’d highly recommend stopping by for a visit should you find yourself in the area, you won’t be disappointed.