Some things that we have seen or experienced on our RV trip are fun and easy to share. Others take more time to process. Visiting the Titanic Museum in Pigeon Forge, TN last month was challenging to process. I wasn’t sure if I wanted to write about it. However, the more time I’ve had to marinate on the experience, the more deeply I’ve been affected. And that my friends, is when it is time to write. 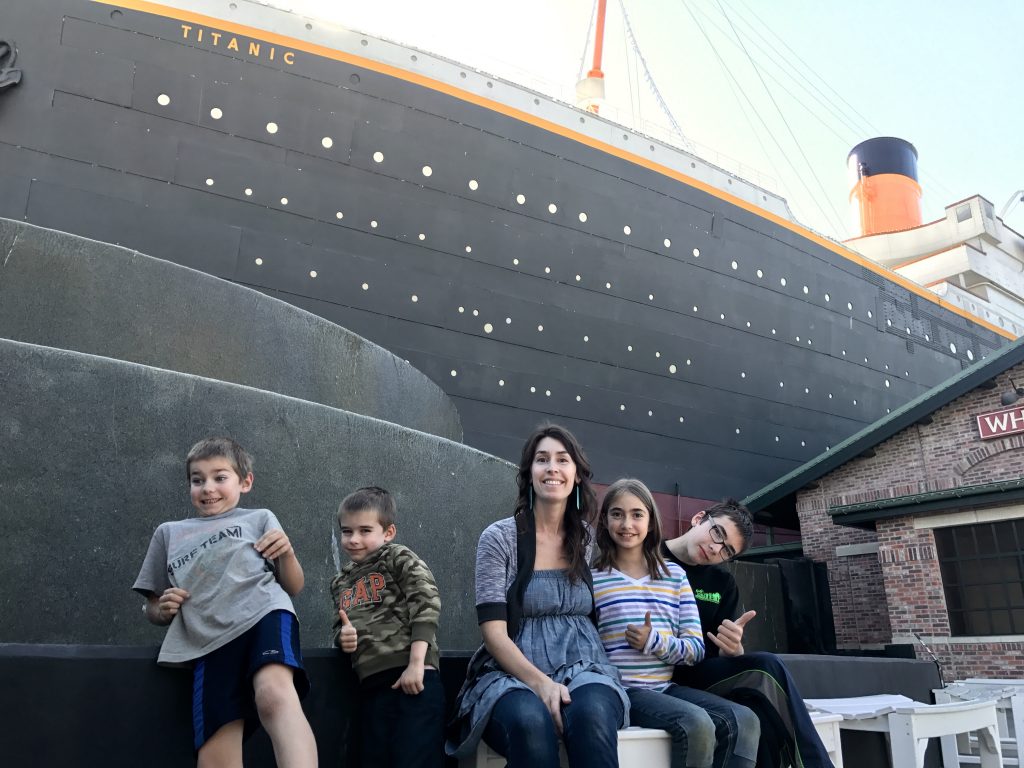 First impressions of the titanic museum

From the road, the Titanic Museum could have easily blended in with the visual cacophony of “tourist trap” businesses. I’ve never seen a town quite like Pigeon Forge before. Businesses bested for our attention in amazing style. Mini-golf, Wax Museums, even an upside-down house called to our children begging them to ask their parents to pull over and spend money. We could practically feel dollar bills floating out of our pockets as we drove along. Had we not specifically heard it was worthwhile, we would have driven right past the Titanic Museum proclaiming, “Look away children, look away!” However, long before we’d crossed the Tennessee border, this museum was on our itinerary.

To be honest, my first impression was of disappointment. Pulling into the parking lot, I noticed that the Titanic Museum’s neighbor was the upside-down house. While it did look cool, the museum was comparatively smaller and frankly, less upside-down-amazing. To be fair, we had recently walked through a life-size replica of Noah’s Ark. Somehow, I’d erroneously assumed the Titanic Museum would also be built to-scale. It’s not. Instead, it looks like a mid-size ship cut in half and turned into a museum. If I seem disappointed, I don’t want you to worry, I’m over it now.

We purchased our tickets (which I’ve read are occasionally available on Groupon) and proceeded into the ship-building. From here my interest level rose. Each member of our family was given an audio tour headset. The content for the children was catered to their level and we proceeded through the museum at our own pace.

I could get sidetracked and tell you that there were 75,000 pounds of fresh meat, 100 grape scissors and 12,000 dinner plates aboard the ship. I could share the touching letter sent from a passenger stating, “It’s been a beautiful day here, and my neck is aching with looking up at the Titanic so I haven’t seen much of the weather.” But while these things are interesting, what really touched me in a place that no list or artifact can reach was the reaction of the passengers who offered everything they had in the moment of deepest need.

This is what mattered

Mrs. Straus (whose husband was the co-owner of Macy’s) gave her seat on a lifeboat as well as her fur coat to her maid and said, “I won’t be needing this.” She then turned to her husband and said, “Where you go, I go.” They were last seen standing together arm and arm on the deck.

The water was only 28 degrees. Colder than the freezing point of ice. Yet the warmth in her words brought tears to my eyes. Sacrifice is most meaningful when it is costly, is it not?

Reverend John Harper knew something of sacrifice as well as opportunity. While submerged in the frigid Atlantic waters, he swam from person to person sharing the love of Christ and praying with them until his death. Even now, I cannot envision the image of this sodden man encumbered with the weight of the water, yet driven to offer his only hope to those perishing around him, without tears in my eyes.

Is this not a picture to enfold within our hearts creating an inferno of passion and purpose? This. This is what matters. Not the grape scissors or the fancy plates. Not the grand view that makes our neck ache. It’s the opportunity. It’s the chance to wisely throw off what easily entangles and run the race with purpose.

Be very careful, then, how you live—not as unwise but as wise, making the most of every opportunity, because the days are evil. Therefore do not be foolish, but understand what the Lord’s will is. Ephesians 5:15-17 NIV

4 thoughts on “The Titanic Museum: It’s deep impact on my heart”